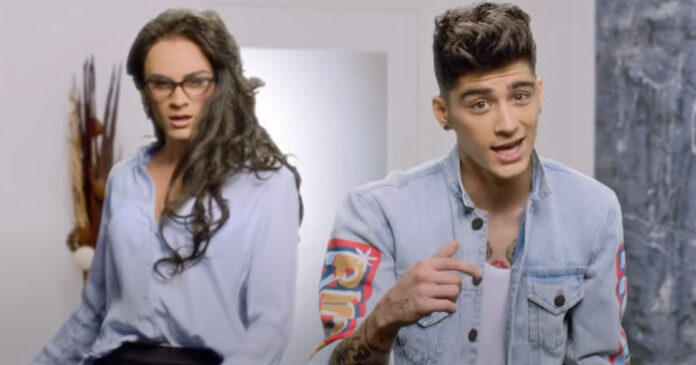 Popular singer Zayn Malik currently appeared in a music video wearing a pencil skirt, heels, and a wig, pretending to be a seductive assistant.

Zayn Malik, as a singer, has been admired by the people of today’s generation. He started his journey with One Direction, AKA 1D band. The group travelled the world and is admired by the fans for their exceptional work and friendship. However, Zayn parted ways with the band in 2015. Although, the fans still hope to see him return with the group.

Currently, Zayn Malik has dropped a picture where he is dressed as a woman, giving the audience a strong hit of nostalgia for the One Direction group. A BTS video of the song “Best Song Ever” featuring Zayn Malik, Harry Styles, Louis Tomlinson, Niall Horan, and Liam Payne launched in 2013. In the video, Zayn looked adorable in high heels, a pencil skirt and a wig.

The song has around 773,244,590 views* on YouTube now. It is still loved and made its permanent place in the playlist of several people. In the photo making rounds on the internet, Zayn is seen covering his tattoos to get into the character he is playing. He played the role of a female “sexy assistant”, which was a bold choice overall.

Zayn also shared many BTS moments during the promotion of the song. He mentioned that his respect for women has increased after trying to dress up like a woman. He appreciated the women for walking so gracefully in high heels. However, Zayn’s drastic character transformation helped him receive much appreciation and attention from people from around the globe.

Vampire Diaries Actress Annie Wersching Dies at 45 Due to Cancer