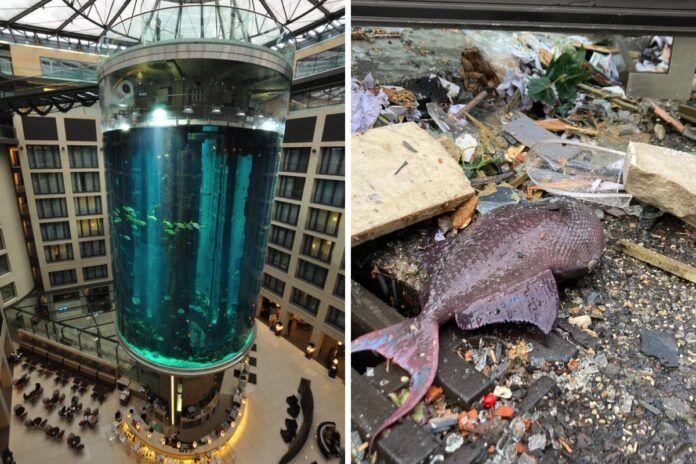 One of the biggest aquarium in Berlin burst in the heart of the German capital on Friday. The burst caused spilling of debris, water and hundreds of tropical fish out of the AquaDom tourist attraction.

According to the Police, several parts of the building which include a hotel, cafes and a chocolate store, were affected as 1 million liters of water poured out from the aquarium. Luckily, the incident didn’t cause any severe injuries to many people and only two persons received minor injuries. Besides, Mayor Franziska Giffey stated the tank had unleashed a “veritable tsunami” of water. However, as the incidence took place in the early hours of the day helped in preventing far more injuries.

AquaDom is owned by the company Union Investment Real Estate. It is described as one of the biggest cylindrical tank in the world. It is 14 meters tall. The company said that the reason behind the occurrence of this incident is still not clear.

It is suspected that the freezing temperatures can be the root cause that went down to minus 10 degrees Celsius during the night hours. It might have caused a crack in the acrylic glass tank, which then exploded under the weight of the water. According to the Police, there is no evidence found that it is a malicious act.

It was confirmed by the Berlin Mitte district government through a twit that in this incident around 1,500 fish died that were inside at that time. The AquaDom housed 80 types of fish that include blue tang, clownfish, and much more. However, few fish that were stuck at the bottom of the tank could be saved.

Fire service officers, veterinarians and other officials managed to rescue 400 to 500 smaller fish from a separate set of aquariums housed under the hotel lobby. They were later shifted to other tanks in the neighboring Sea Life aquarium that were unaffected.