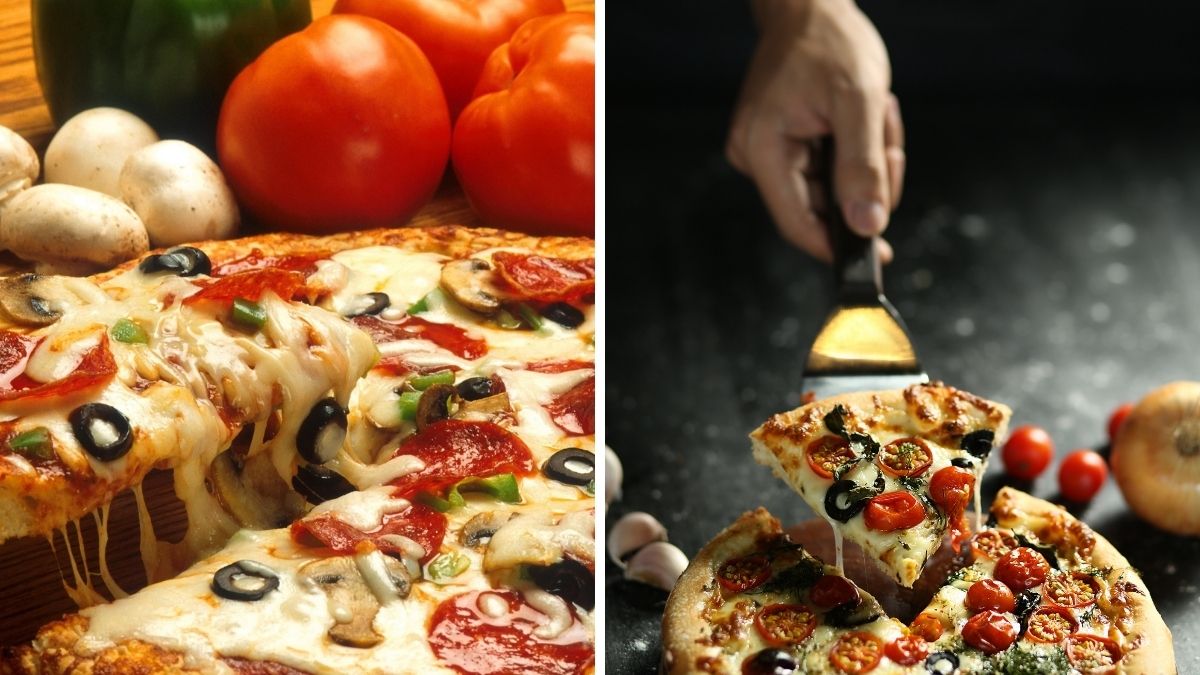 If you are looking for the Best Pizza in Kansas City, then you have landed at the right place. Through this article, I will try to show you some of the most popular Pizza in Kansas City. Pizza is the all-loved and ever-familiar dish baked with cheese, sauce, meat, and veggies. This friendly dish always brings about feelings of home and familiarity. You can never really go wrong with pizza! No matter how you bake it, what toppings you use will still come out absolutely delectable.

The staple of any diet this dish is eaten globally with many people customizing this dish according to their palate. The case in point is the Hawaiian pizza loaded with ham and pineapple! Yes, you heard it right, pineapple, making it the most controversial pizza to date has its fair share of critics and fans.

Some Interesting pizza facts to tickle your bone

Did you know Pizza is so loved in the United States that around 350 slices are eaten each second? In fact, this very love for pizza has given rise to an industry giant and the global pizza market is to reach $233 billion in 2023 according to Business Wire research.

Even the pandemic couldn’t dampen the love for pizza as pizza chains experienced only a 0.72% loss in sales in 2020 compared to the prior year. Americans bought around 203.13 million frozen pizzas in 2020 according to Statista. In fact, this dish is so popular that it even has a day. Feb 19th is celebrated as International Pizza Day. Pizza is so common you will not find one American who isn’t familiar with Pizza.

But there was a time when this dish was not known at all to the general public and people had not even tasted it. Hard to believe right? This was as recent as the 20th century when Pizza was relatively unknown and was only eaten in the Italian communities. Pizza made a late entry into the United States and the international gourmet scene in general.

I have shed light on the history of this dish and how it all started so that you don’t have to keep guessing who invented pizza and how you can thank them.

History of pizza in Kansas

Since the Neolithic age mankind has always been adding other ingredients to bread to make it more flavourful. But it isn’t around the 18th or the 19th-century pizza took its familiar shape. In Italy pizza was eaten by the peasants as it was simple to make and fast to bake.

But in 1889 the then Queen of Italy when touring her kingdom got to taste the pizza eaten by the people of her country. According to legend, the royal palace commissioned the Neapolitan pizzaiolo, Raffaele Esposito, to create a pizza in honor of the Queen. He created 3 different pizzas.

The queen liked the pizza that resembled the Italian flag very much. It was topped with tomato (red), basil leaves (green), and mozzarella (white). The pizza was named after her and is called Margherita Pizza. Pizza got its second breakthrough to fame in the 20th century when Italian immigrants migrated to the United States and opened pizzerias there.

Many returning veterans of the Italian Campaign who had got a taste of Italy’s native cuisine during World War II provided a ready market for the Pizzerias that were newly established in the United States and word quickly spread from then on making it a global phenomenon.

In Kansas, Pizza hut was the first pizzeria to open its doors. Founded by 2 brothers Dan and Frank Carney in 1958 the Wichita Kansas students opened their store in a single location. They were so successful that within a year they had 6 pizza restaurants and from then on Kansas never forgot the taste of Pizza.

Inspired by the success stories of many pizzerias people started inventing their own style of making Pizza and started dedicating them to the city they were invented in. This trend led to some memorable pizza types like the Chicago deep dish, Detroit-style pizza, and the New York-style pizza.

Types of Pizza in the US

In case you are craving Pizza I have gone ahead and listed some of the best places in Kansas City where you can get some amazingly delicious pizza that will definitely satisfy your taste buds.

Italian delight serves authentic New York-style pizza and Sicilian pizza with a thin crust that is easily foldable. It has been in business for over 30 years and is still going strong. You can also customise the pizza by selecting the toppings you want according to your taste.

02. 1889 pizza Napoletana makes authentic Neapolitan pizza right here in Kansas City. It is the best New York-style pizza in Kansas City. They use high-quality ingredients and bake their pizzas in copper-clad ovens. This results in a smoky chewy crust that is just mouth-watering and has lots of flavour in every bite. Their signature dish is Margherita pizza that has San Marzano tomato sauce, fresh mozzarella, fresh basil, Parmigiano Reggiano and extra virgin olive oil as its ingredients.

03. Square Pizza just like the name serves square pizza. Located on the historic independence square this pizzeria serves pizzas that have a crispy crust on the outside and is chewy on the inside. The ambiance and décor of this place are cosy and friendly. Their Chicken Alfredo pizza sells like hotcakes.

04. Old Shawnee pizza has been in business since 1969 and has been serving pizzas with the weirdest toppings anyone can think of making them stand out from the competition. Their unique toppings include adding mac n’ cheese and Nashville hot chicken on pizza. But the best part is that they are truly delicious and make for some amazing pizzas.

05. Artego pizza like the name is known for making trendy pizzas that definitely draw a crowd. They make their pizza dough from sourdough which is then baked to perfection. With an amazing selection of toppings, they give off an authentic Italian flavor. Their Formaggio pizza is drool-worthy as they bake Alfredo sauce with a cream cheese base that is topped with mozzarella, provolone, shredded parmesan, and romano.

06. Waldo’s pizza is an iconic pizzeria located in the heart of Kansas City. A local favorite for many years it has a friendly family vibe. They serve crispy Saint Louis-style crust and honey whole wheat crust as well. They are generous with their toppings and the breakfast for dinner pizza is their signature dish. So, if you like breakfast for dinner foods then this is the right choice for you.

If you ever craved Neapolitan pizza then il lazzarone is the place for you. They have been recognized by the Associazione Verace Pizza Napoletana for serving authentic Neapolitan pizzas and are only one of the 77 restaurants in the United States to receive this accreditation. They make their crust only from 4 ingredients and are naturally leavened.

A grinder is a famous place that offers the best New York-style pizza in Kansas City. The slice of their pizza is so big that they hang over the plate and their toppings are amazing. They serve the best pizza in Kansas City according to their patrons. This place is perfect for delicious bar food and it is where you will get the most value for your money.

07. Minsky’s has served delicious gourmet pizza to the people of Kansas City for over 40 years and have opened their pizzeria in 17 locations. Their pizza has been voted the best pizza multiple times. They provide quality toppings, multiple crust options, and a variety of truly unforgettable pies.

The places on my list are all iconic pizzerias in Kansas City that offer the best of Italian cuisine to its patrons. Whenever you are craving pizza do check them out instead of simply taking my word for it.

The humble dish, pizza has come a long way from being eaten by the peasant to being liked and appreciated by the queen herself. In the olden days, pizzerias became a place for people to meet and enjoy pizza as it was easy and simple to prepare. This food became a boon to students, artists and people who had very little money as they could easily afford a pizza and it was very filling.

Now, this food has become such a global phenomenon that no country doesn’t know about this amazing dish. It has generated so many industries and employed so many people that I am sure you can’t even imagine a time when people didn’t know about this food. I hope my post on Pizza’s inspires you to check out the different pizzerias in Kansas City and fills you with more information on pizza that you didn’t know before.

Which is the most popular pizza in the world?

The beef pepperoni pizza is the most popular in the world.

Which country eats the most pizza in the world?

It is Norway that consumes most pizza in the world. This tiny nation has a population of million and on average they consume around 5kgs of pizza annually.

Which is the least preferred pizza in the United States?

In a recent survey, pizza with anchovy toppings was the least preferred in the United States. The survey interviewed around 6000 adults with 61% of the respondents naming anchovies as their least favorite pizza topping.

Which state in the United States eats the most pizza?

Connecticut eats the most pizza according to a statistic. This state has the highest number of pizzerias per capita in the United States. There are around 3.65 pizza restaurants for every 10000 people.

Which country produces the most Pizza?

No, it’s not the United States given its love for Pizza. It is actually Italy the home of Pizza. There are around 63,000 pizzerias in Italy employing about 100,000 pizzaiolos and they produce over 80 pizzas daily.

Which is the most expensive pizza in the world?

The most expensive pizza in the world is the Louis XIII and cost a whopping $12,000. This pizza takes around 72 hours to prepare. The creator of this pizza is Renato viola who uses refined flour to make the pizza dough. The toppings include caviar and come with the finest lobster in Norway baked with seven types of cheese.